The chance to see a new bit of public land that is normally inaccessible was too much to resist – even after three weeks away at sea and only one night at home! So it was that I met up with seven other keen Branch members and Joe Hansen from DoC at McDonalds carpark in Masterton on the last Friday in August. After a lengthy period of negotiation, and assistance from DoC, JNL had allowed our club the opportunity to access the Rewa Bush Reserve, an isolated block of native east of Masterton surrounded by their pine forests. Hopefully for a win-win weekend, with us helping knock down goat numbers for them.

The weather was fine, but the forecast wasn’t, so after a quick fast food fix our convoy of five vehicles hit the road. After a bit of initial confusion with gates (yes I know it looked like the right gate Martin, but why wasn’t Joe waiting there to unlock it for us?) we arrived at our designated campsite.

Tents, tarps, and sleeping mats were hastily assembled. Or not so hastily for the guy with the big family tent who usually follows his wife’s instructions (OK, that was me!). Then it was time for a couple of quiet beers and yarns before bed. About that time it was determined that I was unlucky. Must have been all the ‘sure fire’ Tararua spots I’ve been to without shooting or even seeing a deer! Totara Flats – yep been there a dozen times never shot one, Tutuwai ditto, Rabbit Flat a couple of trips for nothing. And then there was the previous DoC organised trip to Homeburn where I’d spooked the big stag without getting a shot, and so on. 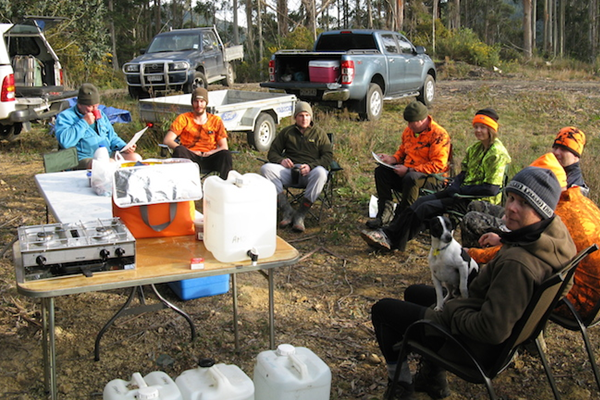 Up at the crack of dawn – or at least I was – having come off a 3 am to 3 pm shift at sea! After boiling the kettle Joe appeared and we sneaked off for a quick recce down the track. Only to find Brad was already out on a knob glassing the faces. No animals seen, but plenty of sign (pig and goats) on the track. A glance down at the country showed me that the Reserve was bigger and steeper than it looked on Google maps!

The others all gradually appeared and it was time for the briefing and block allocation. Martin was studiously drawing lines on maps as we paired up. I was expecting to be one of the ‘novice hunters’, so was a bit surprised to be put in the ‘experienced’ group (six years isn’t really a lot of deerstalking experience Martin!). Poor Bryce got stuck with me. Then we got assigned our block. A quick glance at the map showed that our route through the bush would be up and down – I’m experienced enough to know what all those little orange contour lines close together mean! JNL had also indicated on the maps where they had seen goats. Even Bryce was experienced enough to note that our block was nowhere near any of those places!

At the not so crack of dawn, after a lengthy breakfast, we were all ferried to our drop off points. A radio sched was arranged and we were away. Bryce and I dropped off the track and straight into a steep-sided jungle of fallen trees, crunchy bracken, and entwining supplejack. While attempting to sidle quietly there was a bit of a woof as a pig detected our presence. We sat down for 5 minutes, but no glimpse of the animal or further sounds. After an hour or so, the bush won and we scrambled back up the face, popping out right by the campsite (told you we wouldn’t get lost Bryce!).

The first radio check came, and with it news that Jordan and Chris had crossed into Martin’s block, Brad and Tim were where Jordan had meant to be, and that Martin and Savannah had been dropped at the spot Joe was saving for himself …. and they had shot 3 goats and seen a pig already! Bryce and I exchanged looks – there was a lesson there somewhere. 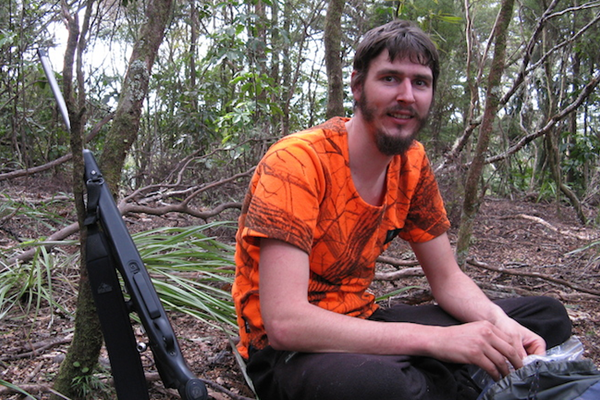 Bryce in the most open bush we found

We trekked up the track a bit then up onto a knob which had the promise of being slightly less steep. Once on top the bush did open out and the animal sign increased. Not much goat sign away from the margins, but the high ridges were covered in pig rooting. With the

strengthening nor’west wind in our faces we stealthed along for the rest of the afternoon without making contact with anything.

The odd distant shot indicated the others were having better luck than us, and by 3 pm with the sky darkening we opted to head out of the bush and back onto the track. With the ridge falling away in all directions, it required a compass as well as GPS to find the right heading. Down through a crappy creek, up a steep face with yet more supplejack, and finally a gorse covered slide had us back on the track, where miraculously the goat sign was plentiful again. We decided to wander down the track for half an hour, but with no sight or sound of animals. Then it started raining.

Back at camp the others all arrived back. Jordan got 1 goat, Brad and Tim had 4, and Martin and Savannah had added to their earlier tally to end up with 7. They’d also found an old rifle buried in the dirt while following up the pig they saw. An old single-shot – it must have been lost by a pig hunter a few years ago. 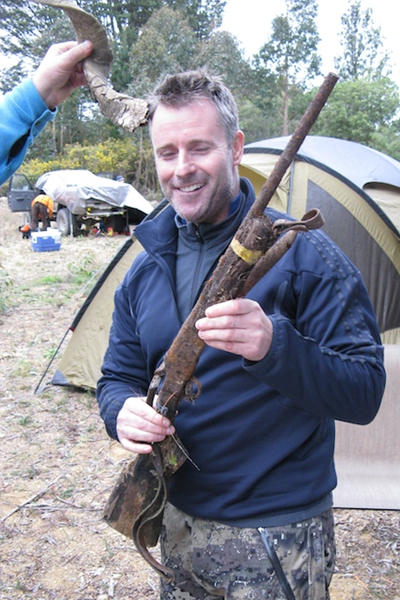 By tea time the wind had really started to blow, and we huddled round the barbeque grateful that the campsite was sheltered, and speculating whether if those tall gums blew over if they’d hit any of the vehicles.

It wasn’t a late night and with the wind howling and rain threatening, Joe moved into the big tent with us. He and Martin exchanged kumara stories until late (don’t even ask!!).

Amazingly by morning the skies were clear and there was a promise of a perfect day. Sometimes it works out well when the forecast is wrong! Joe and Martin must have been feeling slightly guilty as Bryce and I were assigned to their block of the previous day – with assurances they’d even left us one goat which they’d seen as they got picked up.

On the way we startled six goats on the section of track Bryce and I had walked the day before, but they were away into the bush before we could get out and loaded up. After dropping off Jordan and Chris we headed round to our spot. On a high knob, Joe’s phone beeped as he got coverage, telling him he’d become a grandfather – congratulations!

Compared to the bush bash of the day before Martin/Joe’s block was a walk in the park – following a fire-break along the edge of the native. We followed the trail of carcasses and gut bags thinking ‘we should have been here yesterday’! However, just before descending into the native, Bryce froze and shouldered his rifle. ‘Sit down and make sure’ I whispered (speaking from my not so vast experience), before noticing the goat he was looking at was only 20 metres away! At that point it headed for the bush, but a hurried shot from Bryce had it tumbling down the bank. At least we hadn’t missed out completely. I have never felt so relieved to get a goat! 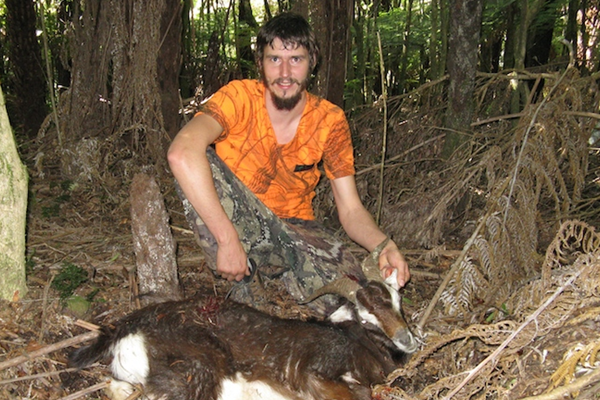 Bryce and his goat

With an hour to go before our rendezvous, Bryce and I had another wander in the bush, seeing a lot less pig sign than the previous day, then scrambled up to the track to await our 12:30 pick-up. We were just finishing our lunch, enjoying the sun, when Bryce suddenly said, “There’s two goats coming straight up the track!”. A bit of a scramble for rifles as two billies came to a sudden halt 30 metres from us. I lined up the bigger one and let rip and they

both turned tail down the road. Crap – I can’t have missed at that range, and another round hurriedly chambered. Then the big white billy toppled over, and his mate stopped and looked over his shoulder which was a fatal mistake. Easy as – two piled up on the track! The second goat was still twitching so I was cutting its throat when Joe, Jordan, and Chris drove up (yes – not what you said it looked like!). Turns out they’d spooked the billies from down the road and were giving chase on foot, so had herded them right past us! See I’m not always unlucky! 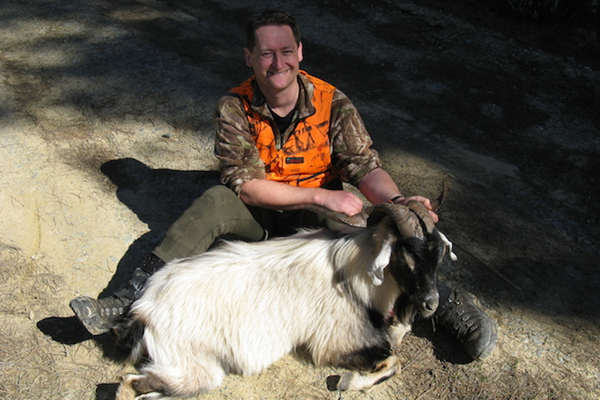 Back at camp, we packed up and reflected on a successful weekend. Although we didn’t see much deer sign, we’d accounted for 17 goats and there were certainly plenty of pigs about. Hopefully JNL and DoC will give us another opportunity. Make sure you try and get along on a branch trip. Lots of laughs and you might even learn something.

Formed in 1937, the New Zealand Deerstalkers’ Association is New Zealand’s recognised National body representing and speaking for hunter generally. The fundamental aim of the association is to ensure … END_OF_DOCUMENT_TOKEN_TO_BE_REPLACED